When I started research for the book I quickly found that the Rev. W. H. Law was given many nicknames by the people he served other than “The Sky Pilot of the Great Lakes”, which was by far the most popular.  I had intended to call the book “Sky Pilot of the Great Lakes” early on in the writing process but when I found the 1910 character sketch about Rev. Law, “The Laughing Doctor” by Hedwig C. Jankowski, I started to rethink the title.

The issue that caused me to rethink the title was Law’s own words in a section of the book where he comments on his many nicknames:

“By many sailors, I am called the ‘Sky Pilot of the Great Lakes’. This is a great, big, comprehensive title that puts me on my mettle, and I will have to set you men a good example, for example is almost as contagious as smallpox, and allure to a brighter world, leading the way myself, or I would be a fake ‘Sky Pilot’.”

Here was my Great-Great-Grandfather speaking to me from out of the past, telling me personally that he didn’t feel the nickname suited him. Now what was I to do? “Sky Pilot of the Great Lakes” was a great title for the book and the majority of newspaper and magazine articles I found used that name to refer to him. His own wife used the title to refer to him in a letter she had sent out to his friends after the Law’s Bethel Home in Hessel, MI had been lost in a fire.

There were other names given to him that I could have used for the title:

“Sky Pilot of the Inland Seas”

“The Bishop of Out There”

“Apostle to the Lake Sailors”

“Jolly Apostle to the Sons of Neptune”

And his personal favorite “The Laughing Doctor”

I struggled with the title for a while feeling I was doing my ancestor an injustice by using a nickname he didn’t like for the title of the biography. After consulting the issue with my wife and a few others I decided it would be a fine title, especially since he would refer to himself as “the Sky Pilot of the Great Lakes” in his own writings more and more as time went on. I felt that if he had eventually accepted it, he would accept it as the title of my book about him. 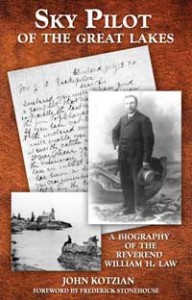 John Kotzian was born in Rogers City, Michigan located on the shore of Lake Huron and raised some 30 miles away in Hillman, Michigan. He is the great-great-grandson of the “Sky Pilot of the Great Lakes”, Rev. William H. Law.

His passion for the Great Lakes and its history grew from the stories handed down through both sides of his family about Rev. Law’s travels and relatives lost in the sinking of the S.S. Carl D. Bradley.

He currently resides with his wife, Kimberly, in Brooklyn, MI.

Latest posts by John (see all)

This site uses Akismet to reduce spam. Learn how your comment data is processed.